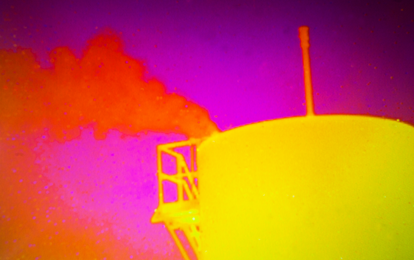 The newly engineered Enardo internal components have proven to be a quantum step forward in sealing technology. Only the Enardo ES-665 Series provides ultra-tight sealing for applications that require maximum emissions control. The Enardo ES-665 performance has improved to 0.1 SCFH at 90% of set pressure at ambient conditions, which surpasses any thief hatch on the market by at least 10 times. In addition to emissions control, the escape of evaporated tank liquid is minimized, which conserves the tank’s valuable oil or gas contents. The Enardo ES-665 is offered as a direct replacement for any standard API 8” thief hatch. Additionally, an ES-665 center assembly can be installed in existing 660 or ES-660 hatches for increased performance, although results will vary depending on the condition of the base.

Inspectors often use an optical gas imaging infrared camera (IR camera) to detect leaks from storage tanks. Common compliance issues include leaking hatches and other pressure relief devices. Violations have resulted in significant fines and even facility shutdown. With the new ES-665 thief hatches, no identifiable emissions are released from the hatch when not venting. Note there are key differences between “venting” and “leakage.” Venting is pressure and vacuum relief to protect the tank. Leakage is the escape of vapors when there is no venting.

Previously, a study by the Colorado Air Pollution Division found that almost 50% of leaks were from thief hatches versus other PVRV devices. Since then, our customers in the Permian, SCOOP/STACK, and San Juan Basin have been making major strides in reducing emissions by implementing Enviro-Seal packing, low-bleed instrumentation and electric technologies. Facility upgrades using these technologies and other efforts helped our oil and gas customers in the San Juan Basin reduce methane emissions by 47% from 2011-20161. The Enardo ES-665 is the latest thief hatch to continue reducing methane emissions ultimately saving money and helping the environment. 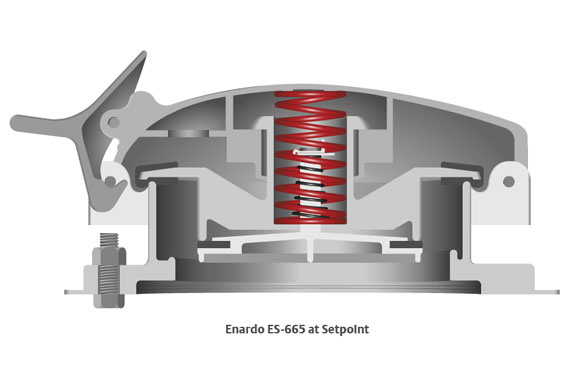 • Ultra-tight emissions performance of less than 0.1 SCFH at 90% of set point to control emissions and product loss

At Vinson, we continue to provide solutions to help our customers reduce and eliminate emissions. The Enardo ES-665 is the latest product in our portfolio to provide drastic improvements. Please contact Vinson Process Controls to learn more or receive a quote for Enardo’s new and improved ES-665 thief hatch.

Utilizing the Bettis RTS series of electric actuators, we were able to assist a valued customer with lowering Maintenance and Operations costs while expanding their process visibility and availability and enabling them to overcome the challenges they were experiencing with their production wells in two critical basins.
Read More
ESG

More producers are moving toward electric actuation due to lower cost of operation and simplicity. With the easy-Drive standalone actuator, producers can get the same reliability across a wider array of applications.
Read More
ESG